SYRACUSE, N.Y. (WSYR-TV) – With the fate of many large summer gatherings still up in the air because of the COVID-19 pandemic, a big question for Central New York remains. Will the St. Joseph’s Health Amphitheater be able to operate? If so, when and with what precautions?

A hand full of artists have preemptively canceled their summer tours including the Black Keys and Kenny Chesney. Both had performances scheduled at the amphitheater.

An updated 2020 St. Joseph’s Health Amphitheater schedule can be found below.

Amid talk about reopening, Gov. Andrew Cuomo has warned that ‘attractive nuisances’ that draw hundreds of people from other areas could pose a threat to public health.

As of May 16 however, no blanket policy for concert venues like the St. Joseph’s Health Amphitheater which is operated by Live Nation has been issued.

In response to the pandemic, Live Nation has implemented a new ‘Ticket Refund Plan.’

The plan includes instructions for ticket holders of canceled, rescheduled, and postponed shows.

Click the player above to watch the full interview.

Does your child have a question about COVID-19 or life during a pandemic? This weekend's "Coronavirus House Calls" is just for kids! Email the question, your child's first name, and your city to our real-life superheroes at coronaquestions@nexstar.tv or on the CBS 42 Facebook page. We highly encourage video submissions. Watch “Coronavirus House Calls: Just for Kids” this Saturday and Sunday at 3 p.m. CT!

BIRMINGHAM, Ala. (WIAT) -- As the death—and mental health—toll from the coronavirus (COVID-19) pandemic continues to rise in the U.S., we're looking past statistics. With all 50 states reopening in some fashion, confusion surrounds our ever-evolving situation. This weekend, we're here to talk about your child's concerns, differentiate between fact and fiction, and move from fear to hope as we navigate this "new normal" together.

LIVERPOOL, N.Y. (WSYR-TV) -- The Onondaga County Health Department has confirmed that an employee at a T-Mobile store in Liverpool has tested positive for COVID-19.

The T-Mobile store is located at the corner of West Taft and Buckley Road. Members of the public who visited that location on the following dates could have been exposed:

Black or white, relax and have a beer: Best friends of different races invite community for conversation and brew 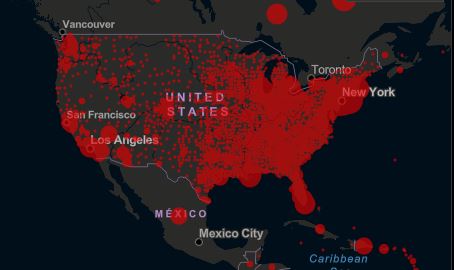